My piece, entitled “Playing the Blues,” was influenced by the thriving music scene in Mankato’s downtown area. This particular box is in close proximity to many of the bars and restaurants that feature live music several nights a week, so I chose to depict a group of musicians performing in one of these venues. Mankato is also home to several recording studios, a college radio station, and a record store, which are represented by the vinyl record on the top of the box. 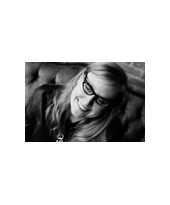 Amanda Wirig is a visual artist and musician from Mankato. She graduated from Minnesota State University, Mankato in 2003, and currently teaches music at RiverBend Academy and Scheitel’s Music in addition to running her studio at the Emy Frentz Arts Guild. Her work has been exhibited in galleries throughout Minnesota as well as in Chicago.