Maestro was the 2017 People’s Choice award winning sculpture from the City Art Walking Sculpture Tour.
The Maestro depicts a time pre-internet when kids would use their imaginations in their play, where there were no limits or boundaries. He is a little boy dressed up in an adult bowtie and tux, still in his tennis shoes and t-shirt, and using a stick as a baton. He stands on a milk stool, most likely he is on a farm, and conducts his imaginary orchestra. His orchestra consists of working, melodic chimes and xylophone, and he invites viewers to join in and make music! 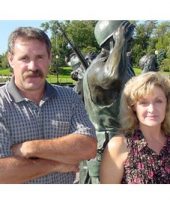 Sherri Treeby is a native of Ohio who moved to SD in the early 80’s and attended Northern State University. She earned a Bachelor’s Degree in art education and a Master’s Degree in art history graduating Magna Cum Laude in 1990. She was a professor of art at Presentation College in Aberdeen, teaching art history, drawing, painting, and design. The arts community recognizes her for her tutoring of upcoming young professional artists. In 2008 and 2010, Sherri was chosen “Woman Sculptor of the Year” by American Mothers, Inc. Since forming Bad River Artworks in 1989, Sherri and Lee have created over 220 individual sculptures, large and small. She brings to the team a strong background of art history and an ability to blend that knowledge into their artwork.