Lumberjack in a Box

Growing up, my Mother always thought that grain silos were actually houses for giants. Eventually she realized that it wasn’t true (not for the reasons you think…she decided that since giants were so big, they probably couldn’t bend over in the silo, and could not reach the food provided for them through the little doors at the bottom. They’d starve to death, therefore, silos could not possibly humanely contain giants), but her story stuck with me. I often wonder what certain commonly seen structures contain, and that is what inspired my proposal for Lumberjack in the Box. 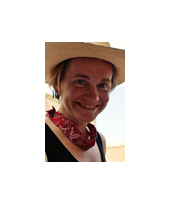 Erika Nelson is an independent artist and educator, exploring the fringes of art and culture as experienced on the back roads and offbeat roadside attractions that dot the American landscape. She travels the country in a permanently altered Art Car, and exhibits the World’s Largest Collection of the World’s Smallest Versions of the World’s Largest Things in a portable Sideshow Extravaganza. When not on the road expounding on the glories of World’s Largest Things and quirky roadside oddities, she can be found hunkered down just outside of the Garden of Eden, in the wonderfully bizarre town of Lucas, Kansas (think Norman Rockwell meets Twin Peaks, with just a touch of Northern Exposure thrown in).