After leaving my career as an electrical technician and machinist, I had time to explore three-dimensional art. I began making traditional mosaic sculptures and enjoyed the results. However, they are not well suited for permanent installation outdoors and cannot withstand the freeze/thaw of our harsh Minnesota winters. So, in 2010 I bought a welder and started experimenting.
I discovered that metal provides greater flexibility and working with scrap offers a wide variety of materials that often influence the design of my work. Not only can my pieces be permanently installed outdoors, but I love turning scrap into art. I look at things differently, especially at junk yards --and now I see art everywhere!
My goal is to make each of my pieces entertaining, fun and recognizable as having been crafted with salvaged materials. I’ve never felt that art has to be profound or deep to have an impact. So, while it is important for the viewer to “get” the recycling message, it shouldn’t necessarily override the simplicity of the main purpose which is to make people smile.
My hobby has become a full-time obsession. There’s no turning back now. This is what I want to do when I grow up! 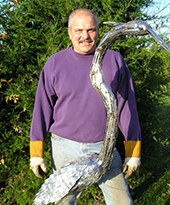 Artist Dale Lewis has gained national and international attention as a respected sculptor. For years, his works have been included in sculpture walks throughout a seven-state area including Minnesota, Wisconsin, Indiana, Kansas, South Dakota, Missouri and Iowa, in addition to British Columbia, Canada.

Lewis has won numerous awards including People’s Choice, Best in Show, Committee’s Choice and First Place. Four of his sculptures were featured at the Minnesota Landscape Arboretum’s Festival of Lights Exhibit in 2018.

Seven of Lewis’ sculptures are permanent and favorite attractions at Big Stone Mini Golf and Sculpture Garden in Minnestrista, Minn.. These include Wooly Bully (a life-size Wooly Mammoth), Big Bird (a life-size extinct Elephant Bird), Sasquatch, Harley the Rhino, Dunes the Camel, When Pigs Fly the Natural Way, and When Pigs Fly -They Will Fly a Fighter Jet.

While Lewis’ sculptures have long been purchased by retailers and private collectors, his sculptures have also been acquired as public art by Mankato, Minn. (Godzilla), Salina, Kan. (Slim the Elephant and Patches the Hippo), River Falls, Wis. (Trout Slayer) and Eau Claire, Wis. (Trojan Horse).

Lewis’ sculptures are available for sale and lease. In addition, he has five traveling exhibits: Scraposaurs, Scrap to Sea, Paint by Numbers, When Pigs Fly, and Traveling Trees. These are available to cities, zoos, museums, arboretums, aquariums, and sculpture gardens. Lewis is interested in providing themed public installations whenever and wherever possible.