The Shepherd represents the joy of returning a lost lamb to the flock, even though the Shepherd is in the midst of a tempest. 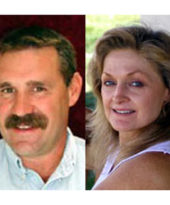 Sculptors Lee Leuning and Sherri Treeby formed the art studio, Bad River Artworks,  after collaborating on several sculpture projects while attending Northern State University in the late `80’s. Sherri and Lee primarily worked high relief sculptures of wildlife and gained a national following through the Rocky Mountain Elk Foundation and Ducks Unlimited where their works were sold to promote wildlife conservation. Their works were also sold extensively to aid local charities and wildlife groups. Selected as one of four of the “City of Presidents” Foundation’s artists in 1999, they have completed four of ten of our nation’s presidents as life-size bronze statues. In 2001, they were selected from a large field of artists to create this nation’s first state World War II monument in Pierre, SD. In fourteen months they finished 6 larger than life statues of soldiers, from all the branches of service, in time to be dedicated four days after the 9/11 attack. Recently, they added a life-size sculpture of a Korean War Soldier to the Capitol site. Currently they are sculpting a Vietnam soldier to be added to the State War Memorial in September of 2016.