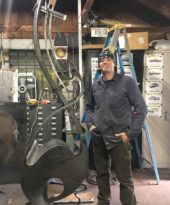 Luke Achterberg grew up in central Wisconsin; he is the grandson of welders and the nephew of automotive customizers. He completed his undergrad at the University of Wisconsin-La Crosse then studied welding at Western Technical College. He worked as a certified welder and fabricator at a custom job shop before completing his Master of Fine Art degree at the University of Kentucky. He has received awards from the International Sculpture Center in New York and Art-St-Urban in Switzerland.  He has had solo exhibitions in New York City and recently exhibited in Columbus, Ohio. His work has been collected into numerous public and private collections. He maintains his own active studio in La Crosse, Wis.