Chimertrol concerns mankind’s attempt to control our world, and what we can actually regulate. Our orderly systems can only contain small amounts of what happens in the cosmos. While we might want to dominate all that happens, life and nature (represented by the twisting rods) changes erratically, only occasionally being restrained by mechanisms contrived by humans. 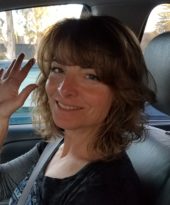 Jennifer Cannon is sculptor based out of San Jose California. Originally from Tinley Park, Illinois, Cannon studied art at Bradley University in Peoria, Illinois. She has a passion for creating large sculptures that appear different from every angle you see them at. They are simple, elegant, and evoke the feeling of movement even though stationary. Most of Cannon’s sculptures are constructed from aluminum, giving them a sleek, modern look. Cannon handmakes each sculpture in a process that can take several months. They range from just a foot tall to over sixteen feet. Cannon has nearly 2 decades of experience developing artworks in a variety of venues but public art is where she has been most focused in recent years. Some of her permanently displayed public pieces are in Imperial Beach, California; Durango, Colorado; and Lampasas, Texas.