An ode to the hands and lives of those who preserved the written word. 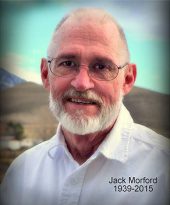 Jack Morford passed away in February of 2015 at the age of 75 after a lifelong art career. He
grew up in Saginaw, Michigan, the third child of four. After high school, Jack attended The Art
Institute of Chicago. He later studied art again at Ricks College in Rexburg, Idaho, and completed
a Master of Fine Arts Degree at the Otis College of Art and Design in Los Angeles, California.
Jack spent a lifetime participating in juried shows, art fairs, being represented by galleries, as
well as commissioning work.